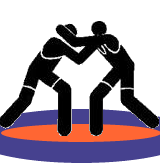 Saw this this morning on FaceBook and thought it would be great to share it here. In addition to Peter you’ll see some of our other loyal classmates there in the crowd too. Can you name them?

This was the New York State high school wrestling tournament held in Syracuse, NY in March 1974. Video shows my first round match against Rick Armstrong, from Whitney Point, who beat me 6-3 and went on to place first. He later became a D3 national champion in college and all-American. Look at the last minute of the match, I was down 4-3, in neutral position and “takedown wins it!” Then Armstrong pulled a move I’ve never seen before (later became illegal)! This video includes my late father Farrell Ruppert, team mate Chris Hart, coach Bill Synder among several others. Special thanks to assistant coach Ray Tellier, who was the cameraman. Peter Ruppert